For the original article by CultureTrip, see here.

Bangkok’s street food culture is a tourist attraction in and of itself. On almost every corner, masterful chefs sell fresh, made-to-order food, spiced and flavored to personal taste. There are so many options it can be impossible to decide what to choose from and where. Luckily, we’ve got you covered.

Arguably the most well recognized Thai dish in the world, this wok-fried noodle dish was introduced to the kingdom only about 60 years ago due to national rice shortages. Today, it’s found on nearly every street corner in Bangkok, made fresh and adjusted to personal tastes. 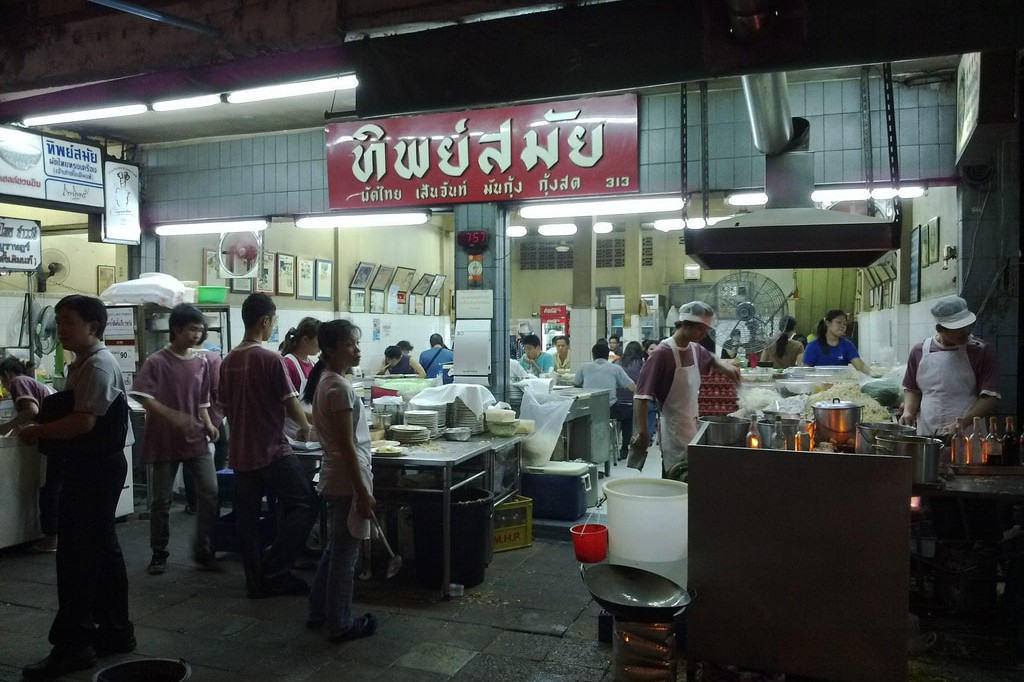 This Michelin-rated street stall has been serving some of the city’s best Pad Thai since 1966. Easily recognizable from its near-permanent queue, Thais and tourists alike order its “Superb Pad Thai” en masse, featuring enormous fresh prawns, crabmeat, squid, and mango. Its efficient chefs dole out portions quickly though, so don’t let the line put you off. Wait times vary from 10 minutes to an hour, but the meal is worth it. 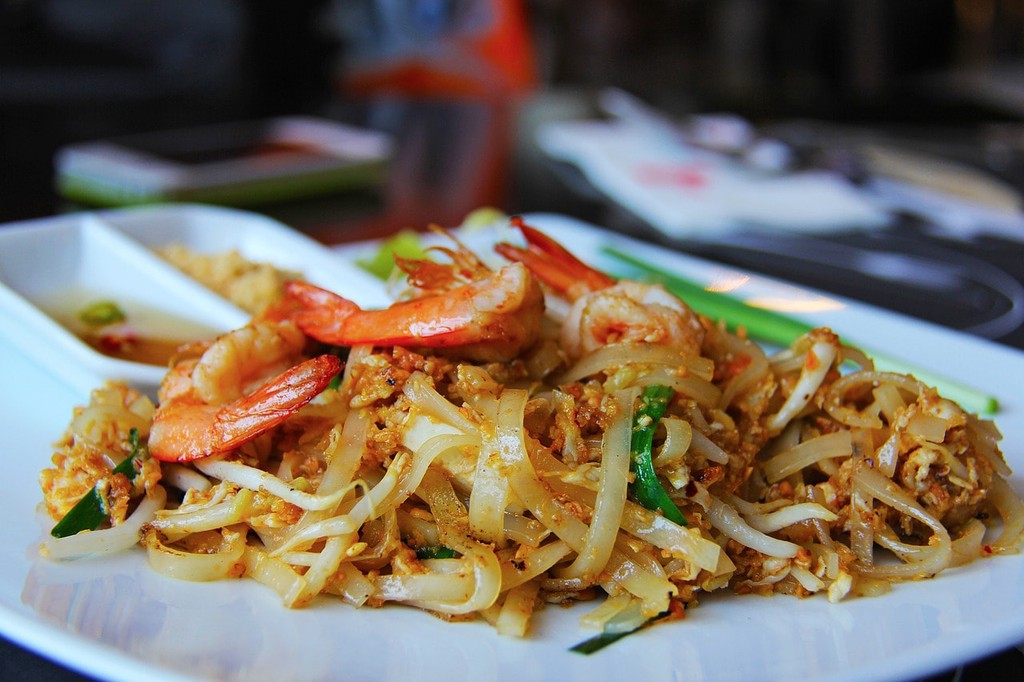 A regular staple on the Bangkok street food circuit, and featured on a host of travel and food shows, this humble eatery keeps its quality high by focusing on two dishes: classic Pad Thai and the more Singaporean-styled oyster omelette. Located about 200 metres from the Thonglor BTS station, it’s easy to find and recently opened up an air-conditioned dining space to accommodate its sustained popularity.

A long-enduring staple to Bangkok street food, the oyster omelette is a hot, savory, pancake-like dish packed with oyster or other shellfish. Many locals prefer the starchy batter and egg mixture to the traditional noodle dish of its cousin, Pad Thai, and a feud rages among loyalists of either camp. Always made to order, patrons tell the cook to make it runny (awsuan) or extra crispy (awlua) or any preference in between. 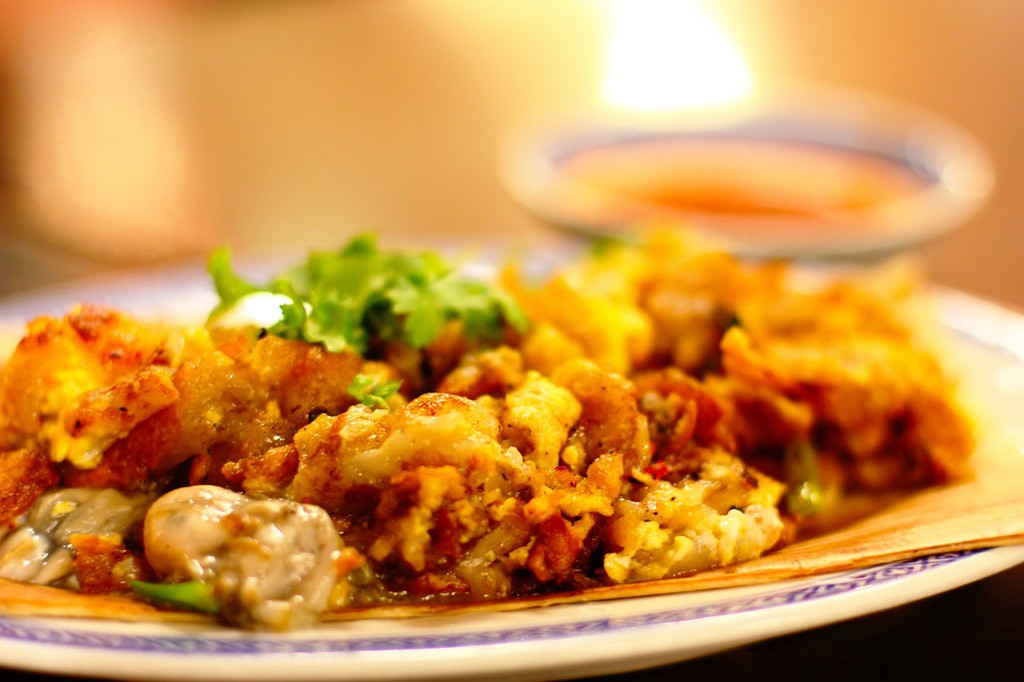 Recently scoring the Bib Gourmand listing by the Bangkok Michelin Guide, this local institution serves up one thing alone: fried oyster or mussel egg crepes. Its loyal patrons choose from two styles: awlua (อ่อลั่วะ,) which is on the crispier side, and awsuan (ออส่วน), which is a bit runnier. 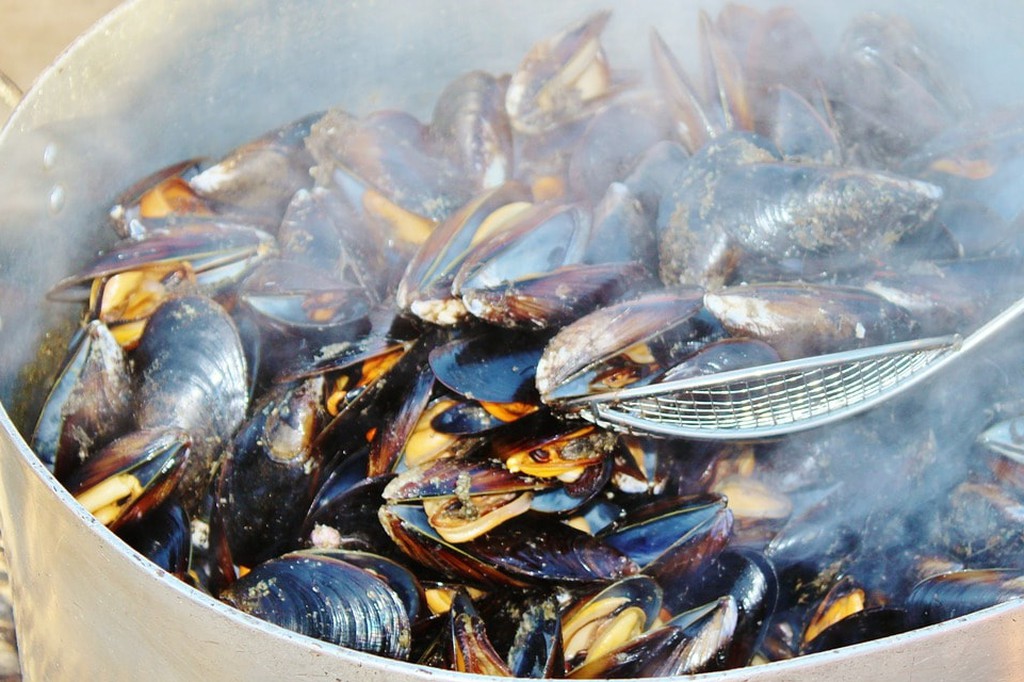 Bang in the middle of Trok Long Moo, a 24-hour food haven, this storied stall has been in operation for 100 years, its sustainability a testament to its humble but delicious fare. Its secret Hoi Tod recipe has been passed down through the family for generations since the current owner’s great-great grandfather traveled to the Kingdom of Siam from China. Then about 30 years ago, the family founded the Thai Beverage Company and quickly became one of the richest families in Thailand. But in fear that their prized recipe would go missing, they chose to keep this incredible restaurant open. While open until 2:30 PM, it’s advised to go early, as the fish is often sold out before noon!

Originating from Northeastern Thailand, this Isaan staple is an immensely popular snack or appetizer that is crunchy, light, and cooling—with of course, a kick of heat. Shredded, unripe papaya is tossed with a dressing of fish sauce, garlic, lime, and hot chilies, and sometimes dried shrimps are sprinkled on top. 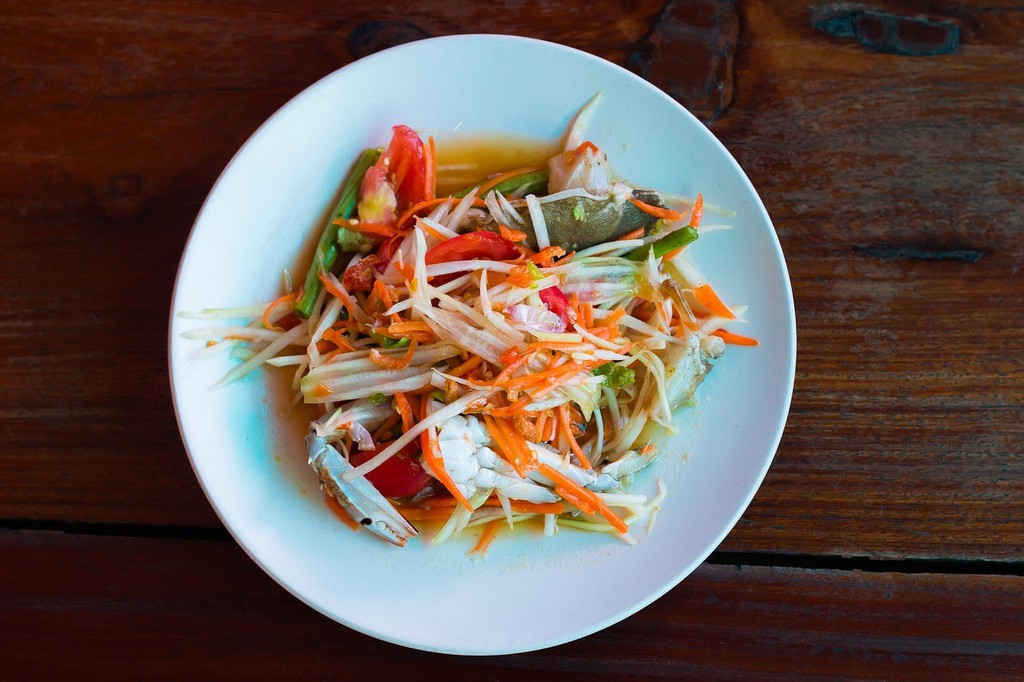 An iconic haunt among locals craving the pungent spiciness of Northern Thai cuisine, Som Tam Jae So’s papaya salad is as authentic as it comes. They craft all varieties according to tastes and preferences, sometimes adding crab and apple snails, with the extra kick of heat Isaan food is famous for. While specializing in their namesake som tam, other favorites include the grilled chicken wings and Isaan meat salad, or laab neua. 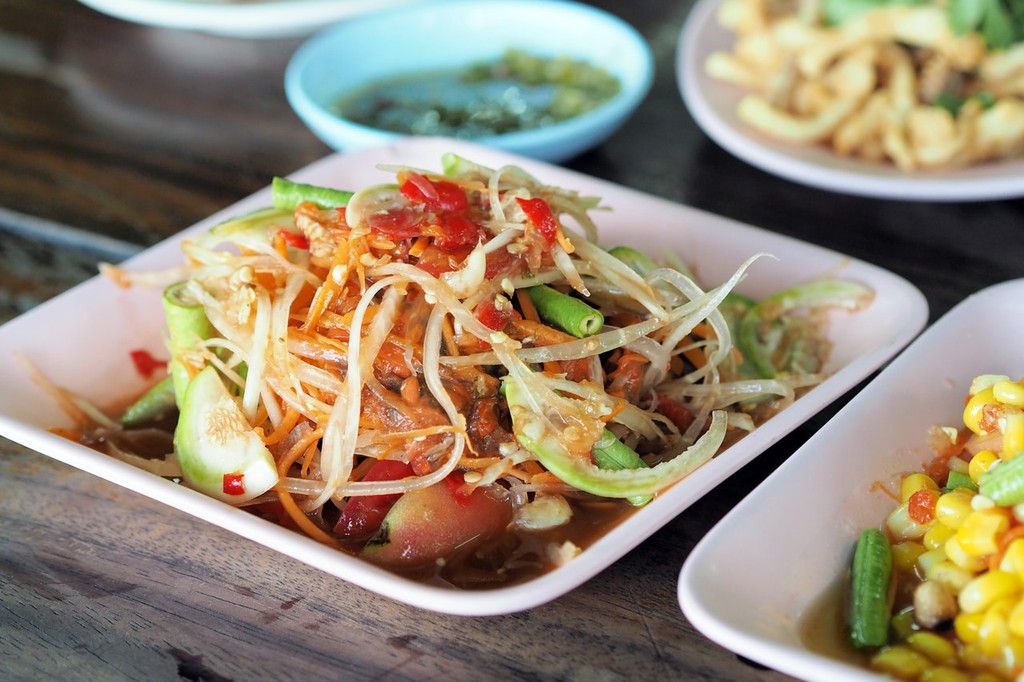 This unassuming street stall is the kind of place you’d happen upon by happy accident, only to realize you’ve arrived at one of the most revered Isaan spots in town. Focusing on fresh ingredients, the lovely staff will make your food as hot as you can handle it, so be aware to specify if you’re uninitiated to the trademark spiciness of Northern cuisine! The varieties of som tam are a must-have appetizer for every table, and other popular favorites include the muu daet diao, or dried deep fried pork, or the pla Nim pao, salt-crusted fish. For the more adventurous, try out the bowl of live river shrimps, or Goong Ten, served in marinade.

One of Thailand’s most popular soup dishes, Tom Yum Goong is somehow both sour and spicy, packed with a medley of herbs and flavorful shrimp. It’s easy to find around Bangkok, with many food stalls specializing in the dish. 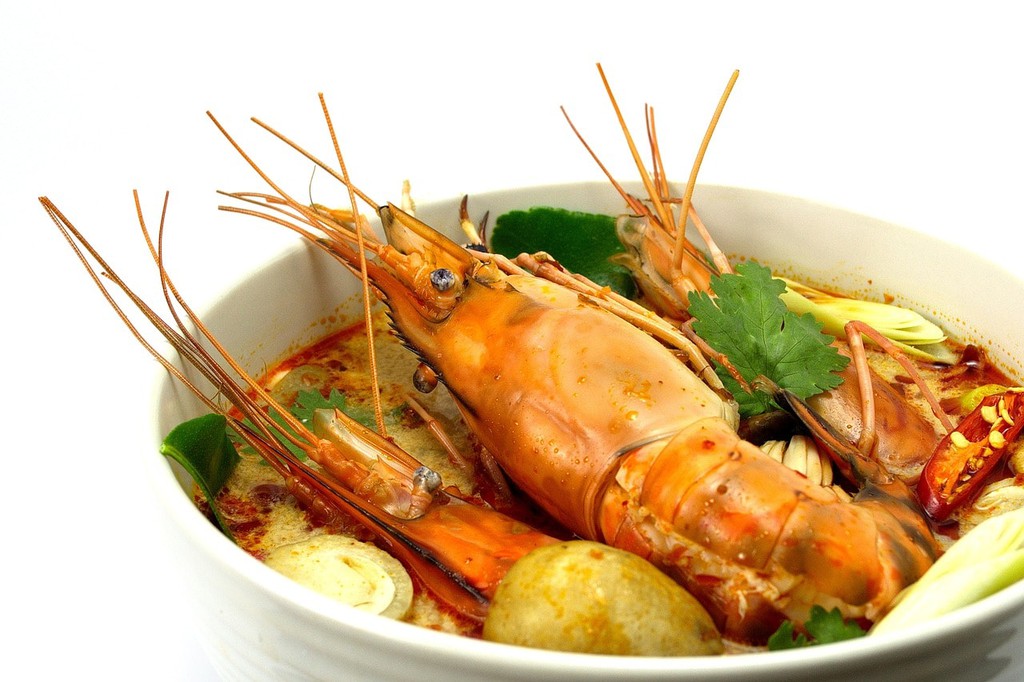 A longtime local staple of Petchaburi Soi 5, P’Aor, also sometimes spelled Pee Aor, serves up its classic specialty in small, medium, large, or extra-large portions. Its creamy and intensely flavorful broth is a rare find among Bangkok stalls’ slightly watery versions, but the accolades are evident by the quality of its inner fixings. The noodle soup can be served with additions like jumbo shrimps, crab, salmon, fresh squid, and even lobster, and the taste adjusted to individual spiciness preference. Be aware the price jumps considerably for more premium options like the lobster, however. 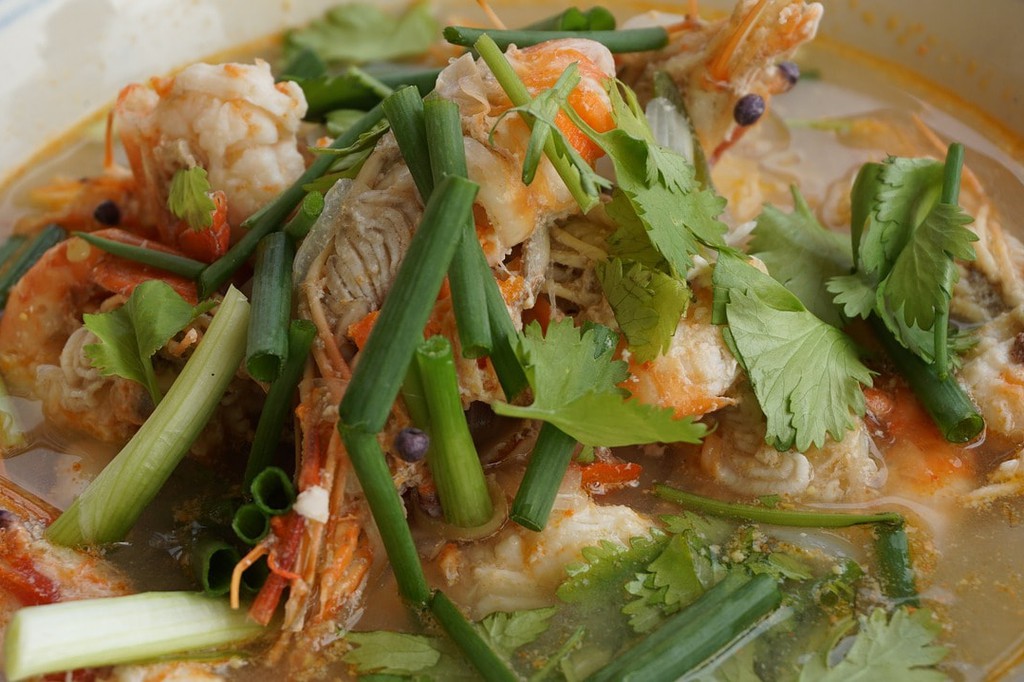 Just a short walk from Khaosan Road in the heart of Bangkok’s Old Town district, this modest stall is lodged among a mélange of busy food carts and eateries. It has gained such popularity for its authentic, top-quality cuisine, that food carts closer to tourist-heavy Khaosan have tried capitalizing on its name. But to get the real deal, head off the path to the authentic Phra Nakhon market to savor the uniquely creamy broth made from prawn fat and coconut shoots, then packed with a generous portion of prawn, squid, and clams.

A staple of Singapore, this Hainanese-style chicken rice has adopted a Thai-style twist all over Bangkok. Adapted from early Chinese immigrants, the growing Chinese population institutionalized the dish in Thailand, where the local chefs rose to the challenge of mastering the tender chicken and sauce specialty. 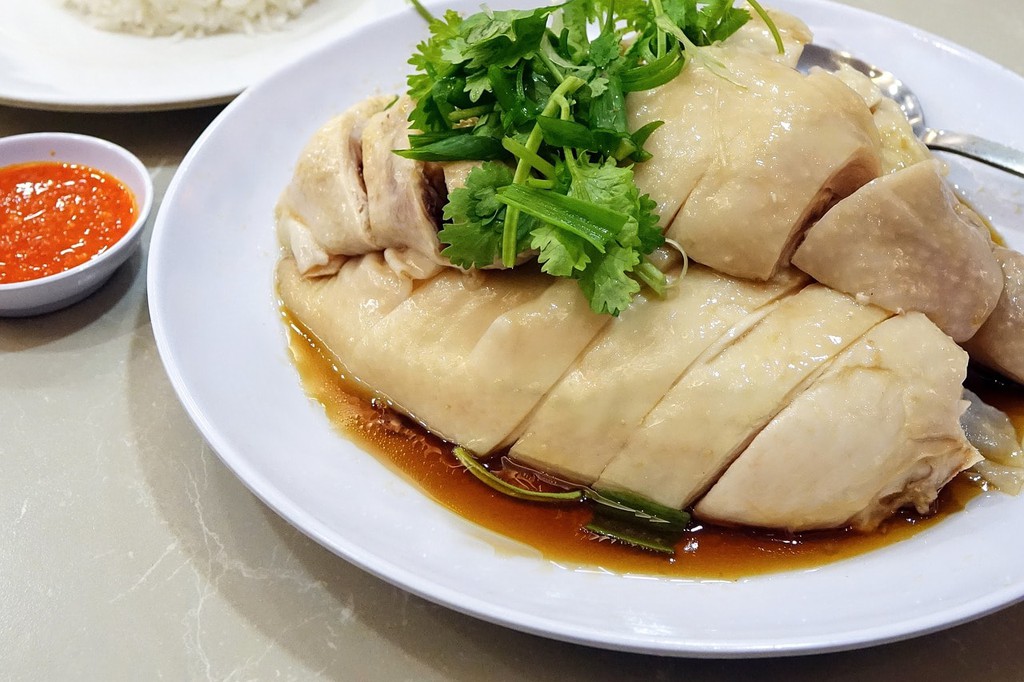 Simple and savory, Khao Man Gai, or Thai-style chicken rice, is a welcome reprise from mega-spicy Thai cuisine. The dish’s simplicity means the best offerings award superb attention to detail, which this Michelin-rated stall has achieved in its near 50-years of operation. 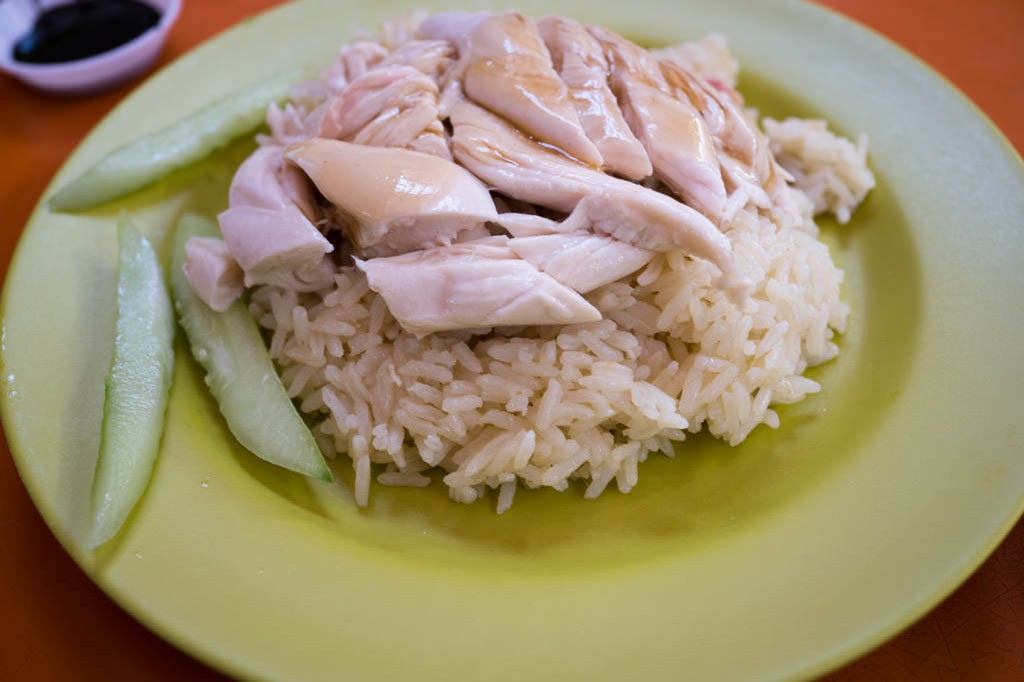 This old-school staple rises above the competition of Sukhumvit street food. Thai-style chicken rice is a dish available on nearly every corner of the city, but locals credit few places with doing the dish right. Fragrant and flavorful, Tang Meng Noodle serves a standout portion of boiled chicken and silken rice in a savory sauce. As the name suggests, Tang Meng is also locally famous for its egg noodle dishes, like kieow moo dang nam (egg noodle soup with wontons and barbecue pork,) and guay deow kua gai (stir-fried chicken and egg noodles.)

Also known as jok, this rice porridge is the ultimate Thai comfort food, with a savory spin. Typically served with pork meatballs with a medley of vegetables and spices, its light but flavorful broth makes it a go-to breakfast staple around Thailand, but popular as a late-night snack as well. 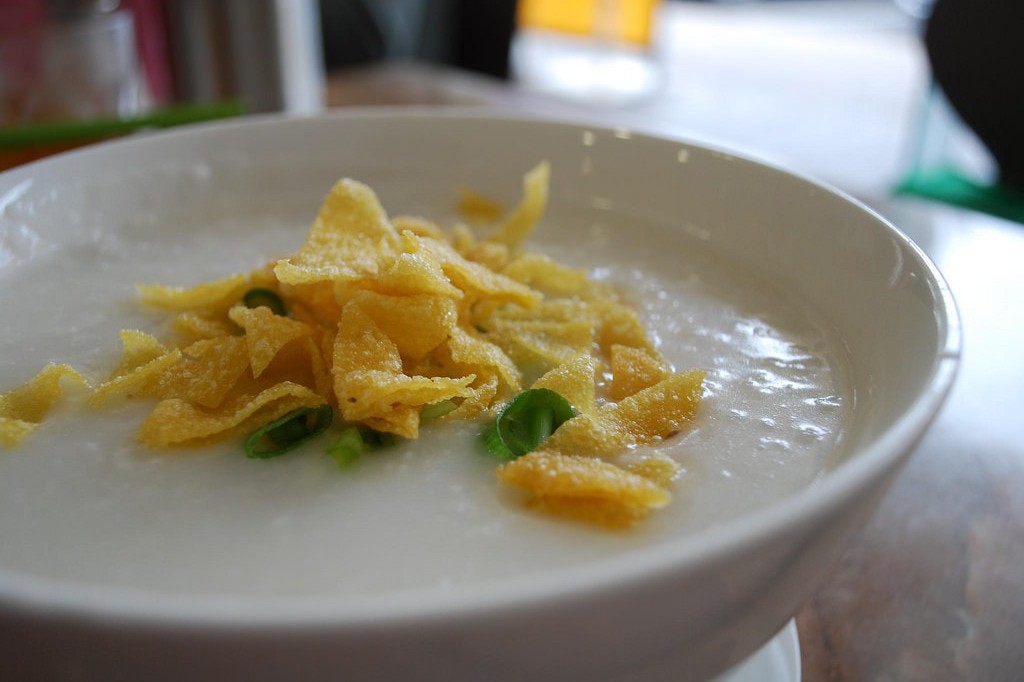 Awarded the Michelin Bib Gourmand designation, this unassuming stall serves up incredible bowls of porridge with minced pork balls accompanied by a choice of raw egg or century egg. A long-time establishment of more than 50 years, its go-to dish is served wok hei, or with a smoky accent, acclaimed by the likes of international food guru Anthony Bourdain. The queue is usually long, but the restaurant’s single offering means the kitchen gets orders out quickly and efficiently.

Boat noodles are a Thai dish with a storied past, originating from the 12th century when they were served from boats along Ayuttaya’s canal system. At the time, small, quick, and savory meals were the priority for busy residents among the historic floating marketplaces, and this dish of beef broth intensified by a splash of fresh cow’s blood became a longtime staple. Today, most of the canals, or klongs, have been drained to pave roads, but the famous dish is still available in choice areas of the city. 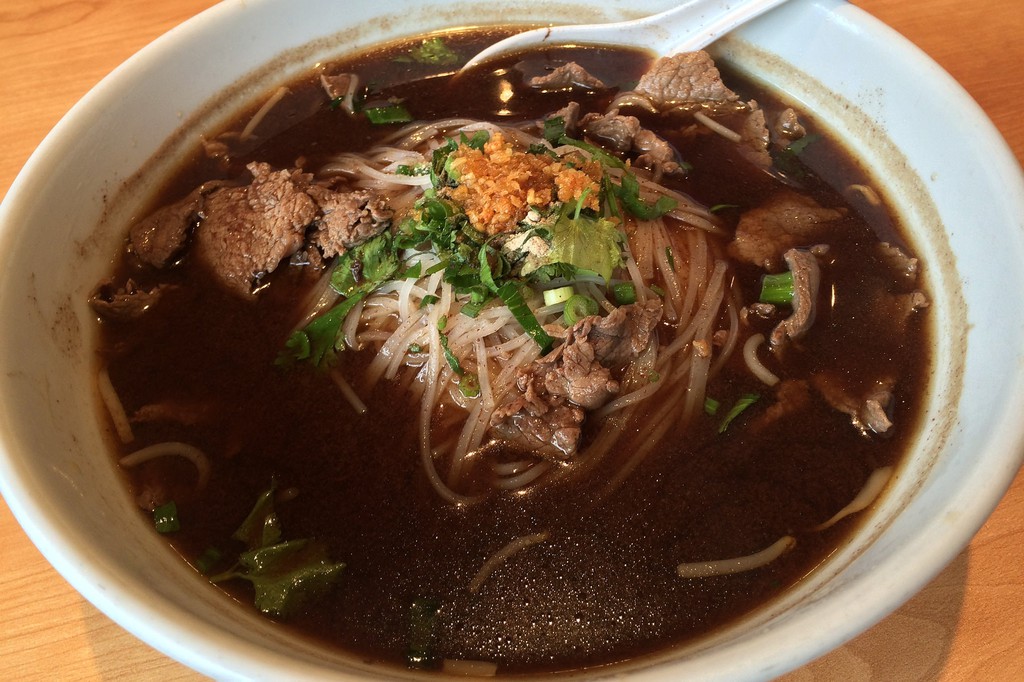 Just a short walk from the famous boat noodle alley at Victory Monument is this humble eatery, serving high-quality, authentic boat noodles away from the throngs of tourists. Thick and rich, each bowl comes packed with meats and spices saturated in an intensely-flavored broth, and paired with fried pork skins and crispy wonton wrappers to soak up the remaining soup.

Found as a staple in food stalls all over the city, Pad Krapow is a minced meat-based dish mixed with chilies, garlic, Thai holy basil, and oyster or fish sauces, topped with an (optional) runny egg. While typically ordered with pork, it’s becoming more common to see duck, frog, or even century eggs thrown into the mix. It’s absolutely indispensable to Thai diets, with stalls and shops all over the city competing to impress their patrons. 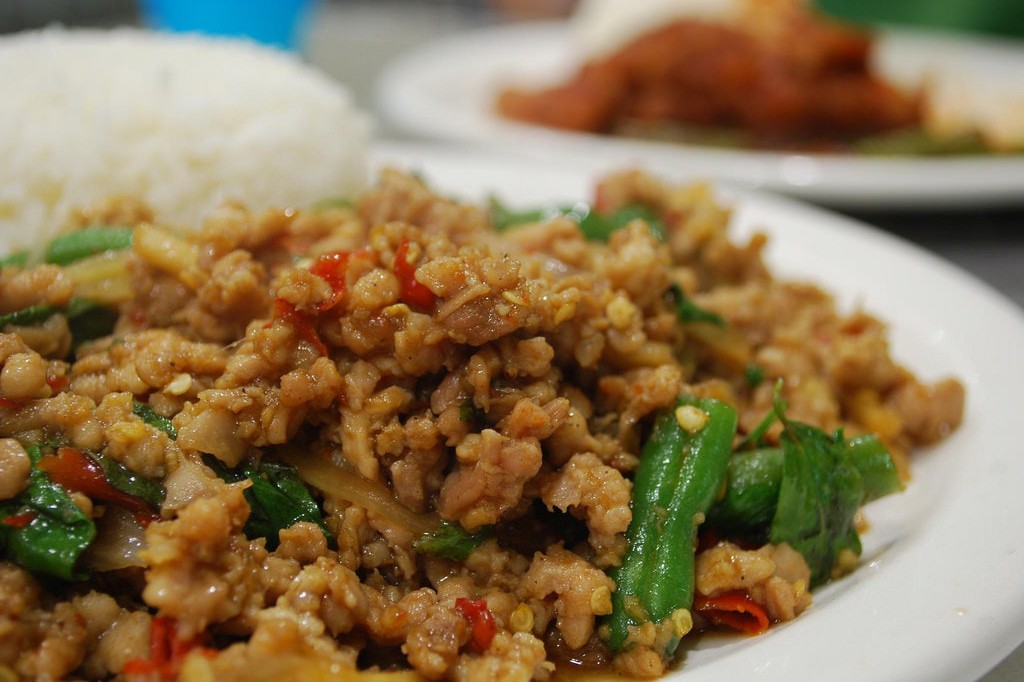 Presiding over the wok at her namesake restaurant, Jay Fai is an absolute master of Thai street food. Although Ms. Fai has assistants, she is practically a one-woman show, and customers at her hole-in-the-wall venue can expect their food to be prepared by the iconic woman herself. Recently awarded a Michelin star rating, her Pad Krapow is easily among the best you can find in the city. Her cult-like following also keep coming back for her rice noodle dish, pad khee mao, and the fried crab omelet, among other tantalizing charcoal-fired offerings. The price point hovers slightly higher than nearby street stalls, but the quality is guaranteed.More Info

Simple but satisfying, Thai street vendors elevate grilled, skewered meat to the next level. The best satay meat is marinated in a spiced coconut milk mixture and served with a peanut sauce and onion-chili relish. 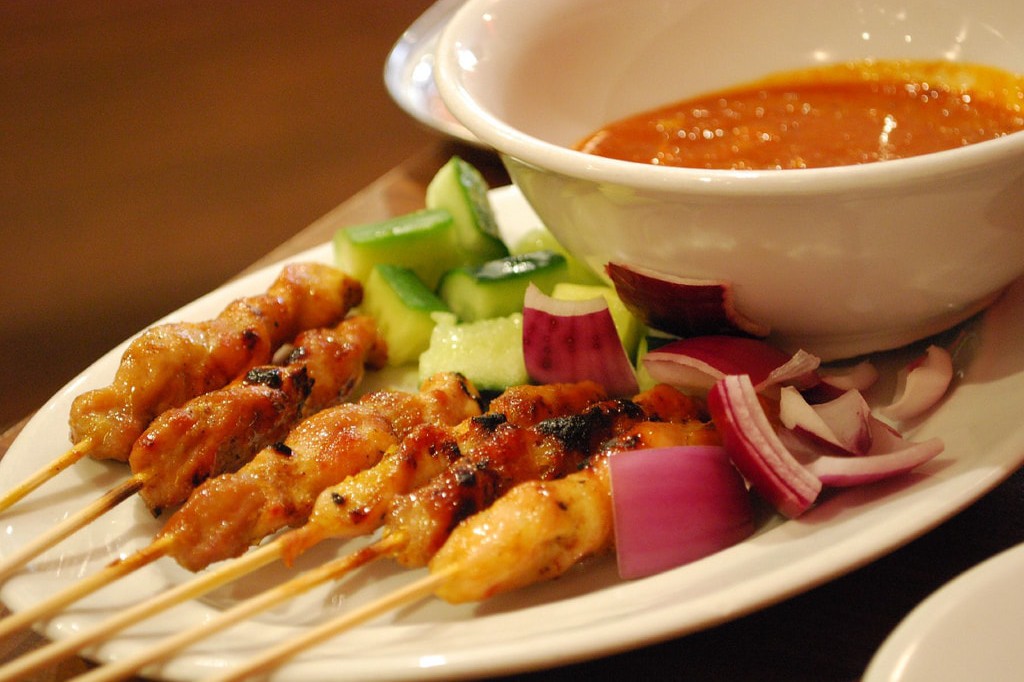 Hidden among the labyrinth of food haven Chinatown, Chong Kee rose to the status of local legend as the kitchen of Vichai Lumlerokit, a chef who has barbecued for the royal family—so you know the quality spares no expense. While satay is available on almost any street corner in Bangkok, the dry meat and MSG-coated sticks pale in comparison to Chong Kee’s tender, smoky snacks. The pork or liver comes with a tart cucumber onion relish and sweet peanut sauce to deliver a uniquely Thai-Chinese taste.More Info

No meal in Thailand is complete without one of its incredible desserts, and mango sticky rice is the perennial local favorite. You can easily find this dessert everywhere in Bangkok, or in Thailand, for that matter, but it’s worth seeking out this sweet, coconut milk-infused delicacy from specialty kitchens. 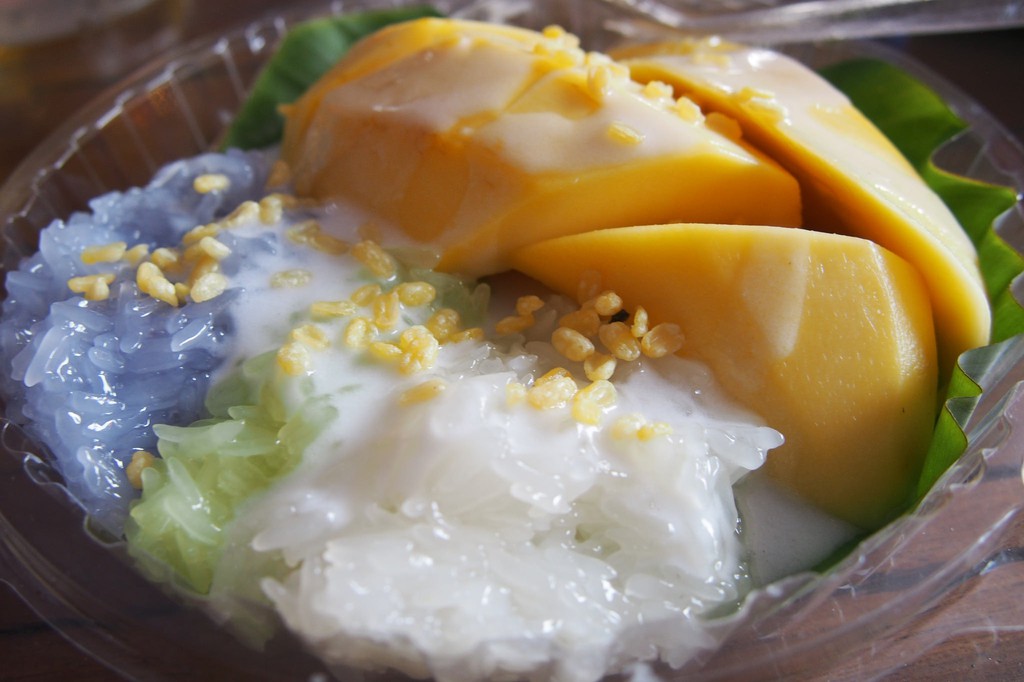 In operation for more than 80 years, this establishment swears by its secret recipe handed down through generations, and used by the current owner’s mother-in-law during her time working in the royal kitchen. The shop sources its fresh ingredients from the best areas in Thailand, like rice from Chiang Rai, coconuts from Chumphon, and sugar from Kanchanburi.

Youth and the SDGs

The 8 Best Things to Do on Khao San Road, Bangkok